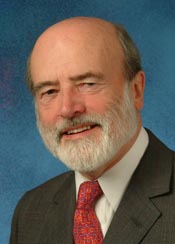 Dr. Peter C. Whybrow is the Judson Braun Distinguished Professor in the Department of Psychiatry and Biobehavioral Sciences at the David Geffen School of Medicine at UCLA.

Interests: Effects of thyroid hormone on brain and human behavior; depression and manic-depressive disease; origins of the instinctual and social behaviors that balance a market economy.

Personal Statement:
Dr. Whybrow is psychiatrist, neuroscientist and international authority on depression and manic-depressive disease and the effects of thyroid hormone on brain and human behavior. A founding member and Fellow of the Royal College of Psychiatrists, Fellow of the American Association for the Advancement of Science, the American College of Psychiatrists, and the American Psychiatric Association, Dr. Whybrow has lectured widely across the United States and Europe, and is the recipient of many awards. Dr. Whybrow is a frequent advisor to universities, foundations, and government agencies and is the author of numerous scientific papers and six books, including A Mood Apart; The Thinker’s Guide to Emotion and its Disorder, which has been translated into several languages and is widely acclaimed as the definitive guide to the experience and science of mood disorder written expressly for the general public. His latest book, American Mania: When More Is Not Enough (WW Norton, 2006), is a provocative neurobiological analysis of the origins of the instinctual and social behaviors that balance a market economy. Combining in lucid prose philosophy, history, science and the vibrant personal stories for which Whybrow is well known, American Mania explains how America’s reward-driven debt-fueled economy has endangered our physical and fiscal health, and fostered the culture of greed and excess that triggered the world financial crisis of 2008. Dr Whybrow is now at work on The Intuitive Mind: Common Sense for the Common Good, again to be published by WW Norton, which reflects upon what we can learn from our recent experiment in market materialism and how, employing neurobiological principles, we may creatively work together to construct a vibrant and sustainable future.